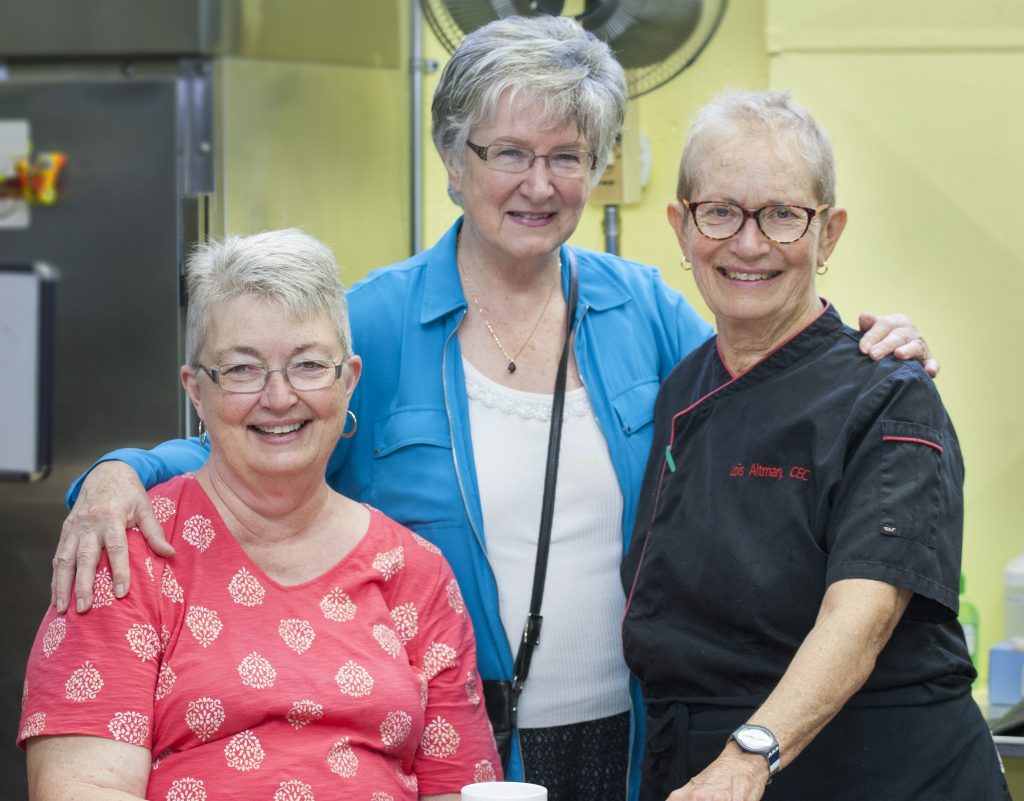 HONORING OUR PAST AND THOSE WHOS SHOULDERS WE STAND ON.

Celebrating our past- HOW IT ALL STARTED.

A critical figure in the founding of The Soup Kitchen of Muncie, Garnet Wince, passed away earlier this summer.

Garnet served as president of the board for several terms and gave her heart and soul to make the soup kitchen a reality. We are grateful for her vision and hard work. Garnet even received the “Points of Light” award, established by President H.W. Bush, in recognition for her service to the community.

We wish to honor her and all the work she and others did to establish the Soup Kitchen by recognizing them in this short history of the organization.

The Harvest Soup Kitchen, as we were then called, was established in February of 1994 with Garnet at the helm. The original letter of incorporation included Billie Shepard, Judy Graham, Rev. William Grady, of St. Mary’s Catholic Church, and Gordon Doyle.

“Prior to establishing the Soup Kitchen, the UAW operated a kitchen at the YWCA,” Billie Shepard wrote in a 2019 presentation to supporters to celebrate 25 years of service. “Because of the loss of manufacturing plants and an aging UAW membership in Muncie, they announced they were having to close, but the hungry still needed to be fed.”

Garnet and Father Grady had witnessed people eating out of dumpsters and knew something had to be done.

With the UAW soup kitchen closing, the new organization began recruiting staff and volunteers, and a location was found at the St Lawrence school building that had been vacated as the school had moved. St. Mary’s provided initial funding, with a $10,000 grant, and a board formed that included representatives of all three Catholic parishes: St. Mary, St. Francis of Assisi, and St. Lawrence.

The Harvest Soup kitchen opened in February of 1994 with Debbie Tucker as its first director and has been going ever since. I was told the first meal that was served was soup and they served ten people.

“Those first years were not always easy which makes us especially thankful to all those who have dedicated their time, talents, and treasures to this endeavor,” Billie Shepard wrote. “A special thank you goes to our dedicated volunteers, past and present board members, community, and individual donors without whose support we would not be able to continue this work of feeding the hungry in Muncie, Indiana.”

Fast forward 28 years; we are serving about 140 a day 5 days a week. Each guest gets a hot meal and sack lunch to take with them for later. We have come a long way from those first few days and years. As Billie stated it was not always easy to keep things moving smoothly but many gave their all to keep it going. Many of you have supported the kitchen in numerous ways

In 2017 the board saw the need to change the name and rebrand ourselves. We became THE SOUP KITCHEN OF MUNCIE, INC. in March of 2017.

Our mission is to serve the hungry in Muncie and Delaware County without regard to race, gender, religion, or sexual orientation.

Thank you to all who have helped us get to where we are today. There is more to do, and we have lots to be thankful for.  We are so grateful and thankful for Garnet and her vision and her hard work.

(Executive Directors note, included in the picture, taken several years ago, is Garnet in the middle, Lois Altman who served on the board for many years as vice president and president, and is now emeritus, and me Loretta Parsons)